TusenFryd, an amusement park 10km south of the city, is enormously popular with kids from all over the Oslo region.

The park offers carousels, a fantasy farm and an excellent wooden rollercoaster, which creates zero gravity 12 times each circuit.

You’ll find it just off the E6. The TusenFryd bus (bus 546) departs from the corner of Fred Olsens gate and Prinsens gate roughly hourly between 10am and 4pm. 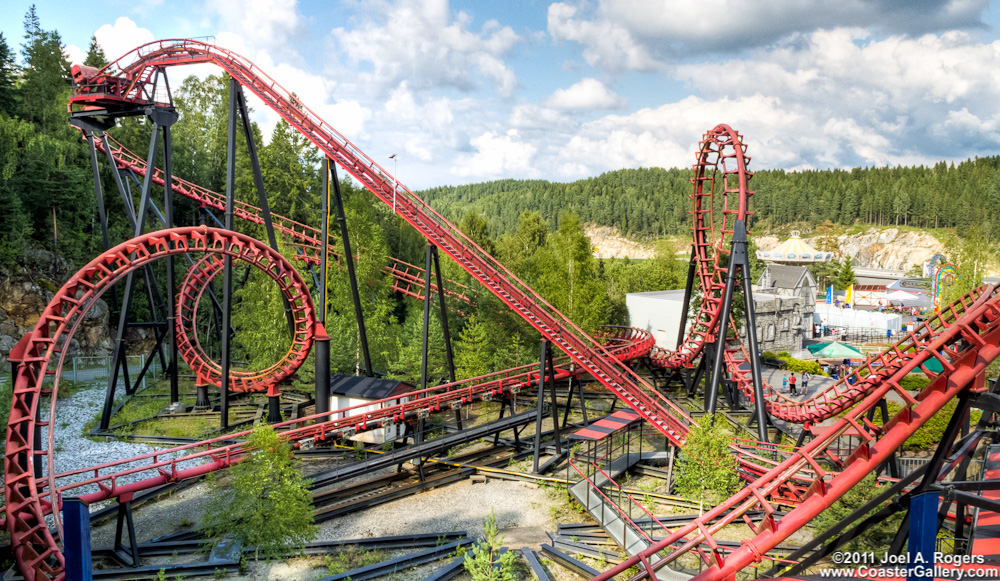 Strategically located on the eastern side of the harbour, dominating the Oslo harbourfront, are the medieval castle and fortress, arguably Oslo’s architectural highlights. The complex as a whole is known as Akershus Festning. Inside the expansive complex are a couple of museums and interesting buildings.

Entry to the expansive fortress is through a gate at the end of Akersgata or over a drawbridge spanning Kongens gate at the southern end of Kirkegata. After 6pm in winter, use the Kirkegata entrance.

When Oslo was named capital of Norway in 1299, King Håkon V ordered the construction of Akershus to protect the city from external threats. It has since been extended, modified and had its defences beefed up a number of times.

When Oslo was rebuilt after a devastating fire in 1624, the city, renamed Christiania, was shifted to the less vulnerable and more defensible site behind the protective fortress walls. By 1818 the need for defence had been superseded by the need for space, and most of the outer rampart was destroyed to accommodate population growth. From 1899 to 1963 it underwent major renovations, and nowadays the park-like grounds serve as a venue for concerts, dances and theatrical productions – a far cry from its warlike origins and a welcome departure from its grim history. Note, however, that this complex remains a military installation and may be closed to the public whenever there’s a state function.

The Akershus Fortress Information Centre, inside the main gate, has permanent exhibits recounting the history of the complex, as well as temporary exhibits highlighting aspects of Oslo’s history. Staff can organise guided tours. At 1.30pm you can watch the changing of the guard at the fortress.

The centrepiece of Frognerparken is an extraordinary open-air showcase of work by Norway’s best-loved sculptor, Gustav Vigeland.

Statistically one of the top tourist attractions in Norway, Vigeland Park is brimming with 212 granite and bronze Vigeland works.

His highly charged work ranges from entwined lovers and tranquil elderly couples to contempt-ridden beggars. His most renowned work, Sinataggen (Little Hot-Head), portrays a London child in a mood of particular ill humour. 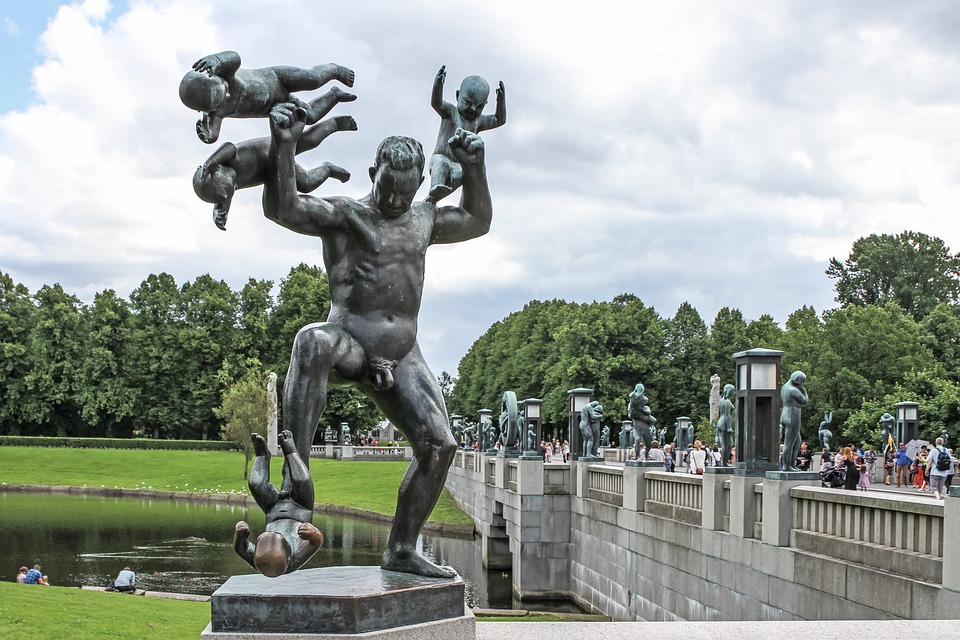 Museum and activity centre that explores Norwegian pop music from the very first commercial recordings in 1904 to the sounds of today. Popsenteret presents permanent and temporary exhibitions (in Norwegian only) lots of interactive experiences and fun “do-it-yourself” stations where you can record music, dress up like a pop star and design your own album cover. Popsenteret is part of Schous culture brewery at Grünerløkka, where you will also find Øvingshotellet rehearsal spaces, Riksscenen folk music stage and Oslo Music and Culture School.

Akershus Fortress is a great place to discover Oslo’s history and enjoy a summer day. The building of Akershus Castle and Fortress was commenced in 1299 under king Håkon V. The medieval castle, which was completed in the 1300s, had a strategical location at the very end of the headland, and withstood a number of sieges throughout the ages. King Christian IV (1588-1648) had the castle modernised and converted into a Renaisssance castle and royal residence.

Guided tours of the fortress are available to the public in summer, and start at the Fortress Visitor Centre. Guided tours for groups are also available. The fortress area is a popular venue for major events, including concerts, public holiday celebrations and ceremonies. 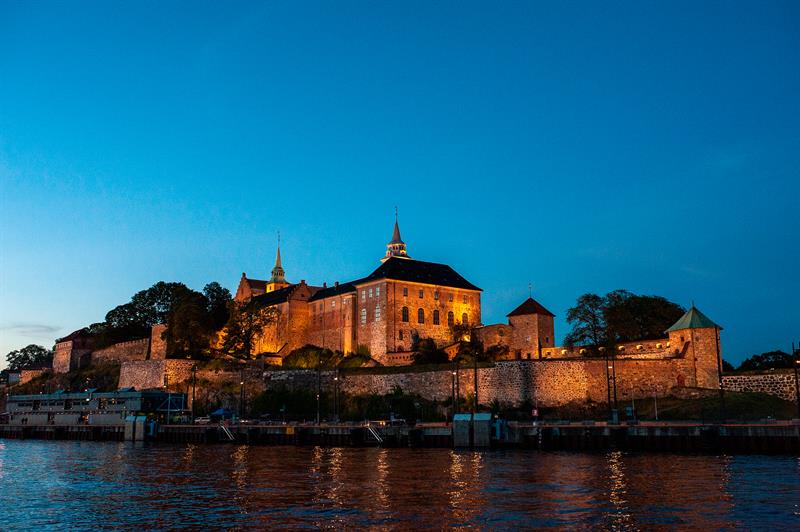 Popular area along the inner harbour with restaurants, shopping, apartments and office buildings. After a thorough renovation, the area has a fresh look and lots of new restaurants and shops. At street level Aker Brygge a vibrant commercial district, and the large open-air areas and indoor shopping street are often used for photo exhibitions, concerts and pop-up events for fashion, art and culture.

For more than a century Aker Brygge was the site of a shipyard, Akers Mekaniske Verksted. The architecture at Aker Brygge is distinctive, with its combination of old, venerable shipyard buildings and modern architecture. When the sun is shining Aker Brygge is teeming with people day and night. The pedestrian area along the waterfront is lined with restaurants with great views of the marina and the Oslo Fjord. In totalt Aker Brygge’s restaurants have 2,500 chairs outdoors. Are you coming to Oslo by private boat? Aker Brygge Marina’s guest harbour has 50 spaces. 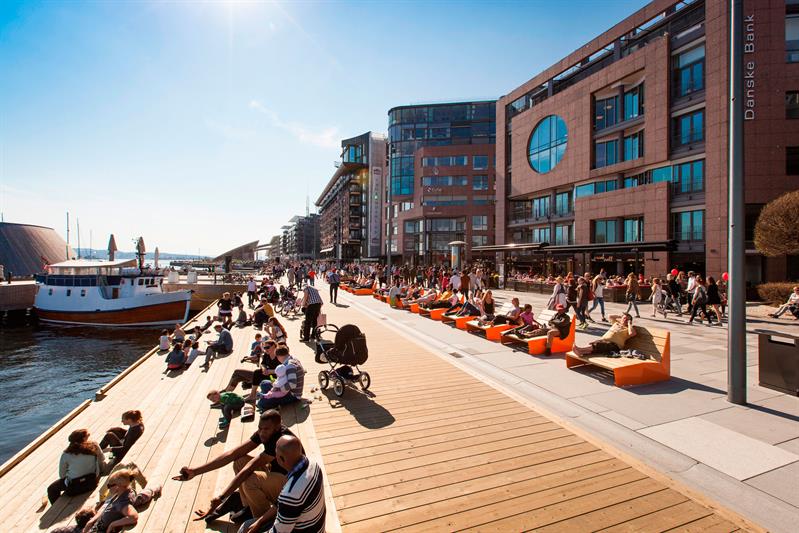