Built between 1911 and 1917 after the plans of the painter Franz von Matsch, The Anchor Clock is situated on the oldest square of Vienna ‘Hoher Markt’ and represents a typical Art Nouveau design.

The clock forms a bridge between two parts of the Anker Insurance Company’s building. The clock itself is adorned with mosaic ornaments. In the course of 12 hours, twelve historical figures or pairs of figures move across the bridge among them Joseph Haydn, medieval lyricist Walther von der Vogelweide, Empress Maria Theresa and Prince Eugen of Savoya. Every day at noon, all figures parade accompanied by music from the various eras. This tourist spectacle is a special kind of Viennese High Noon.

‘Ankeruhr’ aims to commemorate Vienna’s past and the transitory state of live and being. 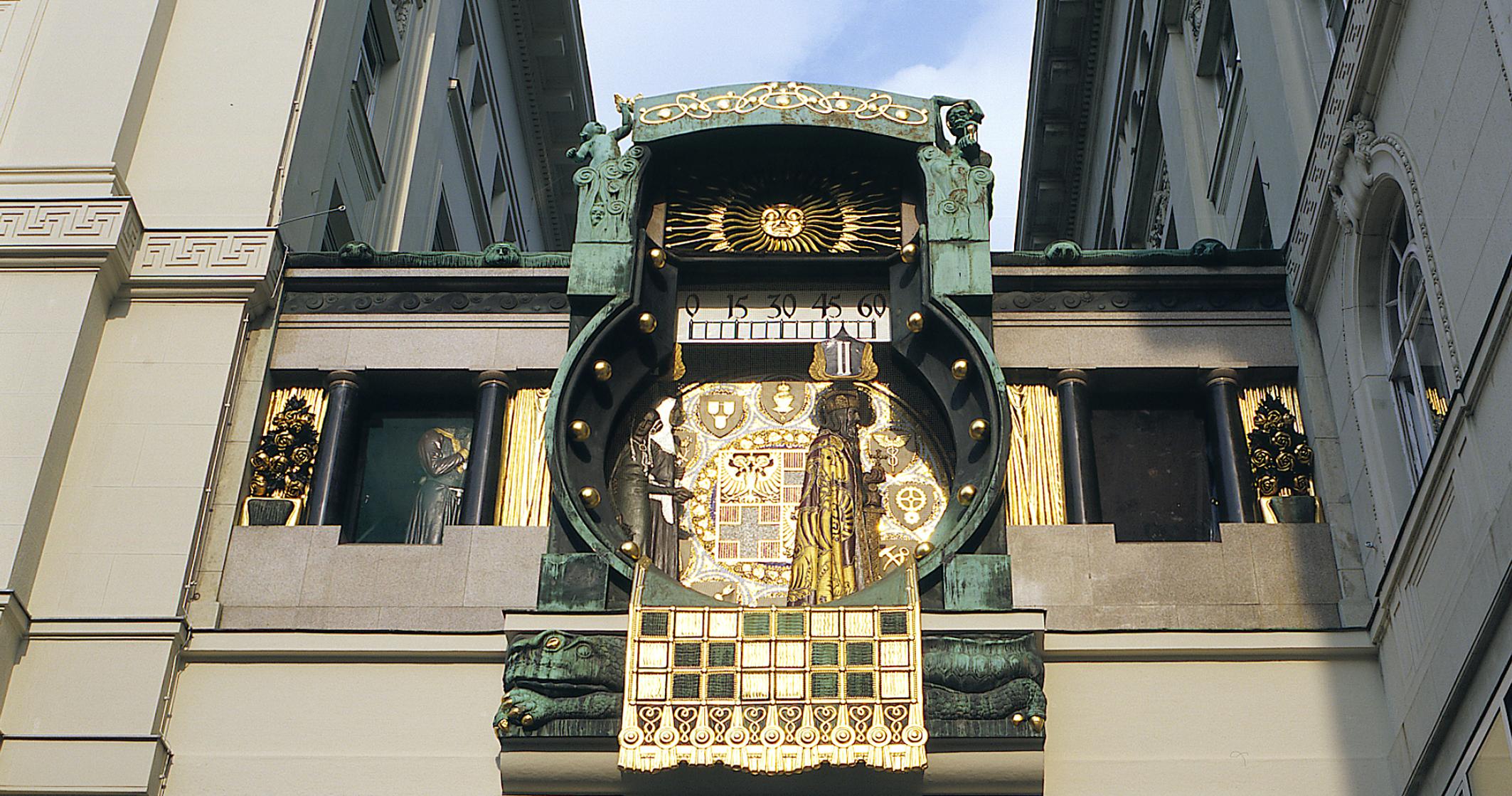 In the middle of a splendid park, are two magnificent palaces on the Belvedere grounds. They were constructed for Prince Eugene of Savoy by J.L. von Hildebrandt, a famous Baroque architect.

In the middle of a splendid park, are two magnificent palaces on the Belvedere grounds.

At this time the Belvedere Palaces were still located outside Vienna’s defences, but today they are a part of Vienna`s third district which is not far away from the very centre of Vienna. The Palaces’ architecture and interior design are typical for Rococo style.

Today, both palaces house museums featuring Austrian painting. In the lower palace the “Österreichisches Barockmuseum” (Austrian Museum of Baroque Art) displays Austrian Art of the 18th century. In the upper palace you can visit the Austrian gallery with a collection of 19th- and 20th-century Austrian paintings. There, you can find works of artist of the Secession movement such as Gustav Klimt (1867-1918), Egon Schiele (1890-1918) or Oskar Kokoschka (1886-1980).

In 1803, Europe’s first alpine garden was created in the extensive park area of Belvedere castle following a suggestion of Archduke Johann. Today, more than 4000 plants represent the diverse flora of the alpine ecosystem. Spring and early summer are the best times to visit as many plants foliate and start to flower. 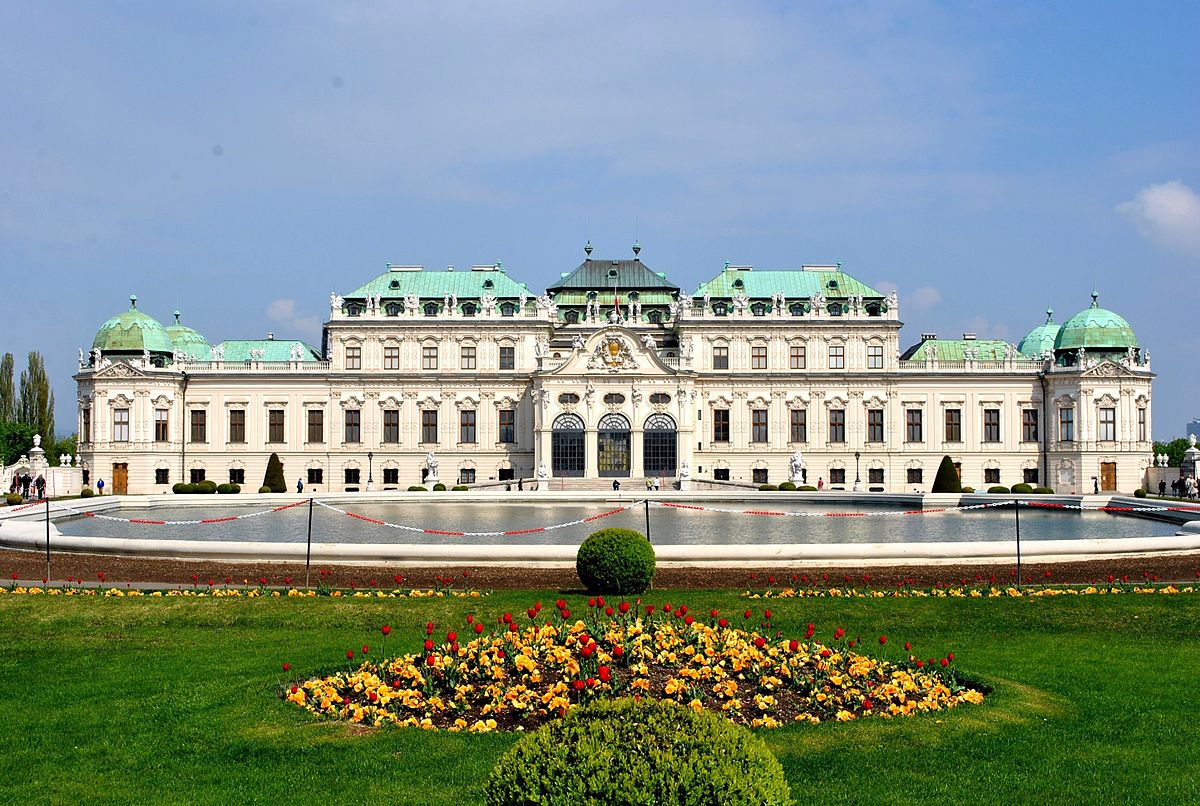 The Donauturm is the right place to go if you want to enjoy a magnificent view over Vienna. The Viennese affectionately call the tower “Concrete needle”. It is 352 meters high and was built within 20 months!

While enjoying the terrific view visitors can take place in the cafe or restaurant, where traditional Viennese specialities as well as modern delicious meals are served. The cafe rotates slowly. Stay a bit longer, so you can get a panorama view.
The more daring of you can enjoy a spectacular view while plunging into the sky of one of Vienna’s highest buildings: Since 2000 the Danube tower features the highest bungee center of the world!

Close to Danube Tower you find Vienna’s most impressive skyline: Uno city is home to UN headquarters and seems to be a city within the city with its decidedly modern architecture. Within the last years some more skyscrapers containing offices and flats alike have been erected in the vincinity. Danube river mirrors the skyline and heightens the effect.

Danube Island – Vienna’s recreational mekka – is just round the cornder too!

Originally a medieval castle, Hofburg, Vienna’s Imperial Palace, but today only the castle chapel (‘Burgkapelle’) demonstrates its medieval past.

The Hofburg was extended to a magnificent residence when the Habsburg’s power increased. That’s why one can find almost any architectural style, from gothic to art nouveau. Nowadays this enormous complex is home to “Österreichische Nationalbibliothek” (National Library), “Schatzkammer” (Imperial Treasury), and houses a collection of musical instruments, another collection of weapons, a “Museum für Völkerkunde” (Museum of Ethnography) and famous “Spanische Hofreitschule” (Spanish Riding School).

Vast “Heldenplatz” (sqare of heroes), situated next to it, is very impressive, too. Equestrian statues of Archduke Karl, who won the battle of Aspern against Napoleon’s troops (1809), and Prince Eugene of Savoy, who defeated the Turks, attest to Austria’s glorious past.

“Heldenplatz” is more than a square, it is one of Austria’s symbols of national identity. 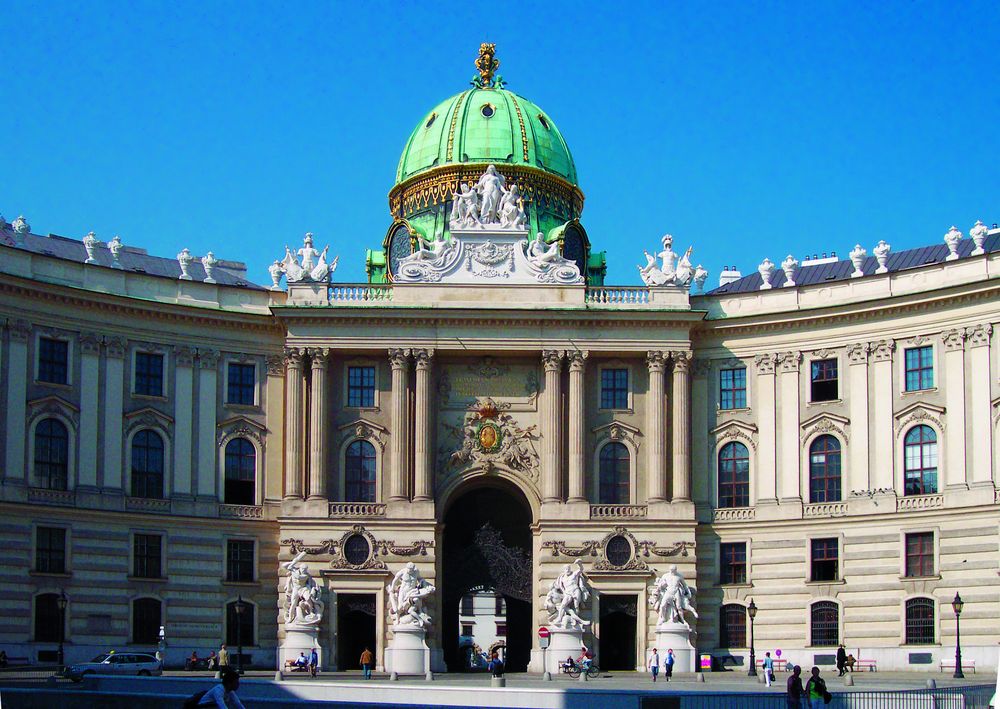 There is quite a number of markets where you can buy fresh vegetable and asorted tidbits. But Naschmarkt is arguably more than that: it is a Viennese institution dating back to the 16th century.
The location itself is spectucular: Wienfluss, Vienna’s second river, was roofed over during the 19th century. Some dealers put up their stalls on top of this roof and that was that.

Today, Naschmarkt is a unique mixture of Austrian traditions and oriental influences. Viennese shrewdness meets bazar mentality. It is a great place to shop for goodies and to have lunch at one of the many stalls, coffee shops and restaurants.
Saturdays, Vienna’s major fleemarket sells anything from junk to antiques to early birds.